From The Lake To The Table: Cleveland’s Seafood Season

Fall is the time for sport anglers to fill their coolers with Lake Erie’s yellow perch. The same holds true for commercial fishing enterprises like Szuch Fisheries.

“When you throw away fish like that, you got some good fishing going,” Holly Szuch said. “Right now in the fall, we usually fish here in Cleveland.”

Holly and her husband own the operation. Where they’re catching is a secret, but on this day, their 42-foot vessel, “The Whip,” found the fish, and lots of them: 8,000 pounds to be exact.

They unload their haul of yellow perch here at Catanese Classic Seafood in the Flats. These fish have a special designation.

“In 2015, we got our fish MSE certified as a sustainable resource,” Holly said. “Lake Erie is the first lake in the US to get this certification.”

The fish go straight to the processing room where they are scaled, filleted, and packed for sale at local restaurants, like Alley Cat Oyster House, where chef Andy Dombrowski serves up hundreds of perch dinners a week.

“One of the best thing about being a chef is getting fresh, local ingredients,” Dombrowski said. “You cant get anything better than when the boats come in and we get perch that afternoon.”

And that freshness gets passed along to you, either in a restaurant, or in the seafood case of your favorite grocery store.

“That makes me proud to hear people appreciate what I do for a living, just like a farmer,” Holly said.

Plowing the waters of Lake Erie to harvest gold, taking it from lake to table.

As I’m sure you know, Miami continues to struggle to get back to operational. We expect the flow of fish to start arriving in Miami Thursday and Friday (21st & 22nd). There will be many different industries looking to do the same thing. The actual amount of fish arriving into Miami might be less than expected. Grouper, Snapper and other southern species will be limited through next week. Many vendors are re-routing into NYC, Boston and LA. There is only so much cargo and airspace available overall, putting pressure on regular shipments into those ports. Due to this, we are even seeing delays of fish arriving from Alaska.

As of June 1st many fishing areas have opened for Wild Salmon. The weather hasn’t cooperated as hoped and landing have been light. King have been almost non-existent from anywhere but the Copper River. This goes against projections. Kings were thought to be very light but our reports from our favorite Copper River fisherman says otherwise. They have landed more Kings so far this year than most of the seasons total of the last 2 years. This, of course, is one fisherman’s findings. Not everybody is having that kind of luck but we do see more Copper River kings than we expected. The hope is this translates to a better overall King Salmon catch than we have seen in the past few years. Only time will tell. We expect landings from the many open areas to increase production volume and lower prices We feel the week leading to Father’s Day will be a great time to promote Wild Alaskan Salmon.

Copper River Salmon season opened this past Thursday the 18th. Landings were light but encouraging. We will have Copper River Sockeye Salmon available this week. Fish will arrive to us over the weekend for early week sales. The next opening on the river will be announced Sunday the 21st. it will be either a 12 hour opening on Monday 22nd or Thursday 25th. Escapement up river will determine the date of the opening.

This year Wild Salmon is expected to be down from the past 3 years. Records have been set in the last 3 years and as cycles go this will be more of a return to normal numbers of the past 5 to 10 years.

King Salmon will be very limited this year as the species is under stress. Conservation is being put into effect for this years’ fisheries. Alaskan Wild Life officials are trying to keep fishermen tracked on Sockeye and Coho landings and to avoid catching Kings. So expect to see Sockeye with limited Kings all summer. 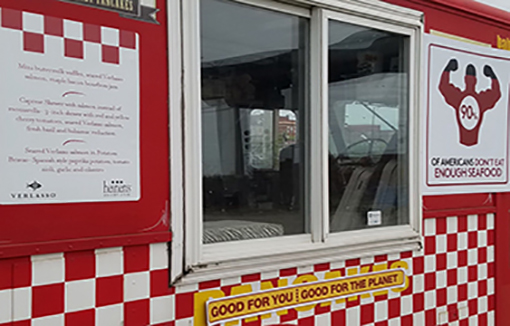 While one would expect to see these elevated seafood dishes at an upscale restaurant in New York or Los Angeles, California, they are actually being served on a food truck, as part of an innovative collaboration between Cleveland, Ohio-based grocery chain Heinen’s Fine Foods and sustainable salmon supplier Verlasso salmon in Miami, Florida.

Verlasso is sponsoring the Heinen’s salmon-focused food truck at the Lincoln Park Zoo Food Truck Social in Chicago, Illinois, on 13 May, in an effort to gain recognition for Heinen’s brand in the Chicago area. While the retailer operates 18 stores in Ohio and is more well-known in the state, it operates four newer stores in Chicago and wants to grow that market, Marty Gaul, director of seafood for Heinen’s, told SeafoodSource.

“This is our first adventure with a food truck. Verlasso found a few different events going on in Chicago and we selected the food trucks because we thought it would allow us to get in front of as many customers as possible,” Gaul said.

“We look at this food truck opportunity as helping Heinen’s delve deeper into the Chicago community,” said Jennifer Bushman, principal of Route to Market, which oversees strategic business development, marketing collaboration and culinary for Verlasso. The food truck is also designed to increase consumption of salmon and seafood. Messages on the food truck include the fact that 90 percent of Americans don’t eat enough seafood, along a graphic with a muscle man, according to Bushman.

Verlasso and Heinen’s already have a very productive sales partnership, working together on promotions, demos and events over the past four years.

“Verlasso salmon is our number one selling item in all of our seafood departments,” Gaul said. The high sales are due to the fact that it is a sustainable salmon that is yellow rated by Monterey Bay Aquarium’s Seafood Watch program and because Heinen’s runs specials on the salmon for all the major holidays and at other times of the year, according to Gaul.

In addition, Verlasso’s team supports the stores with cooking classes, recipes, demos and events. For example, Heinen’s and Verlasso have held cooking/ wellness education classes that teach shoppers how to incorporate fish into their daily diets.

As part of Heinen’s “Taste for Rewards” loyalty program, the chain recently retailed Verlasso’s frozen bags of 5-ounce skinless fillets for USD 8.99 (EUR 8.19) per pound. “I wasn’t sure how it would go, but it was very well-received by our customers. We went through 100 to 150 cases,” Gaul said.