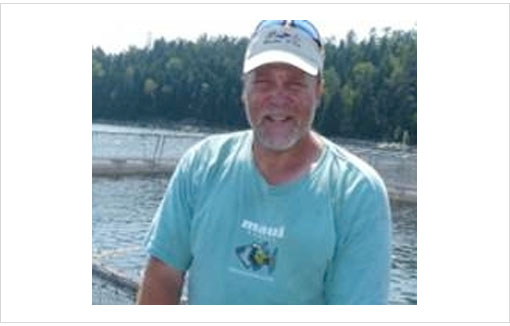 Manitoulin Island Ruby Rainbow Trout
We have discovered a great fish farmer in the Georgian Bay area of Lake Huron. The farm is located off the coast of Manitoulin Island. Mike Meeker, family of Canadian hockey fame, has a fantastic enterprise raising Ruby Rainbow Trout. The farm is producing an all-natural Trout and an organic trout. There is very little difference in the two products. The feed is slightly different to meet organic standards but both products are raised with conscience stewardship. After the Trout is harvested they are transported to Wheatley Ontario Canada to the John O’s Foods production facility. John O Foods is a state of the art facility that also has been certified by the strict Organic Standards by Global Trust as well as three other Organic certification organizations. They also are MSC Certified for the Great Lakes walleye and Yellow Perch fishery. The partnership between Meeker and John O’s is a perfect match for Catanese Classic to partner with. We are carrying both the all-natural and organic items and look forward to growth in our relationship with both farmer and processor.

The following is part of an interview with Mike Meeker: Mike Meeker has just been recognized by the premier of Ontario for being the first producer of certified, organic rainbow trout in the country. He said he’s not doing anything terribly different than he was before he was certified. Meeker said he wasn’t giving his fish antibiotics for six to seven years before his certification which is contrary to most commercial operations. That, he said, shows how healthy his fish were already. But Meeker said there are strict rules. “The most important thing is food,” he says. “What do we feed the fish? And obviously what we put in, whether you’re human or fish, you put in your body is going to be a big part of your make-up. We have really stringent regulations about food. We can’t have GMO ingredients.” He goes on to say that he has to be able to demonstrate that the fish meal itself is environmentally sustainable. Space is also important to grow healthy fish. Meeker says they should have the same density as if they were growing in the wild. Meeker said these are just good practices generally. “I hate to differentiate the organic from the normal,” he said. “I lived on the site where I grew my fish and I raised my kids on that site, so I think all of us fish farmers are committed stewards of the water, and the organic standards take that idea a couple steps more.”

Wild Sockeye Salmon For Winter
We are now well past Fresh Wild Salmon season. Many people want to utilize Wild Salmon year round. I want to take this moment to promote a really fantastic alternative to fresh Wild Salmon. We have a MSC Certified, Monterey Bay Aquarium “Green” list Alaskan Wild Sockeye Salmon fillet that will make Wild Salmon in winter a no-brainer for everybody. The product was caught at the peak of the season this past summer (2015) in Prince William Sound and Yakutat Alaska. The Sockeye was caught specifically for creating pin bone out frozen sockeye salmon. This makes all the difference in the world regarding the quality of the salmon. There’s plenty of product on the market that was frozen due to lack of fresh sales or caught in areas that the fish had more age on it than the fresh market would accept. Our product is caught on small vessels landed in short day trips directly to a processing plant in Yakutat or Cordova Alaska. The fish are filleted and pin boned while still in a rigor or pre-rigor state. The the pin bones are removed without damage to the fillet. The pin bone removed fillets are then individually vac-packed and flash frozen. Then boxed and sent to the Lower 48 for distribution. These fillets eat as close to fresh as any frozen wild Salmon we have ever experienced. Priced right and beautiful, fillets are 1 to 1.5 pounds each skin on. This will bridge the gap until The Copper River opens in Mid-May 2016.

Market Update
Lake Fish
We have reached the end of the Ohio Lake Erie Yellow Perch season. We waved goodbye to our fearless boat Captains Mike & Holly as they left our docks for the last time for 2015. The boats headed West for winter storage and maintenance. We will have previously frozen Lake Erie Yellow Perch fillet cut from our own local fish that were frozen the day they were landed here at our docks. Our Perch cutters have been raving about the quality of the P/F fillet. we will have the P/F fish as long as our supply lasts. Other winter options will be a very limited IQF Yellow Perch fillet from our Canadian neighbors, and by very limited I’m not sure of how much or little we will have for sale at this writing. There will be good supply of Euro Perch (a cousin of Yellow Perch from Eastern Europe) and Zander, a pike/perch that isn’t really related to our Yellow Perch but has eating and visual characteristics that lends itself to use as a substitute when supply is short or non-existent.

Walleye has begun to slow. The Canadian walleye fishermen have around 2 weeks left to catch walleye. Weather conditions will dictate how often they will get on the water. When you feel the strong winds of December they’re more than likely not fishing. We expect to see walleye for the next 2 to 3 weeks but in more limited supply than it has been.

Lake Whitefish supply is good and should remain good throughout most of December. There’s a winter fishery for Lake Whitefish and we expect to see fish from that fishery starting mid-January.

White Bass and White Perch will wind down over the next 2 weeks. We expect very good supply the 1st week of December but slow to end by mid-December.

Sword/ Tuna
We have reached the end of North Atlantic Swordfish and Tuna season. As the fish migrate South to winter feeding grounds there will be a lull in Sword and Tuna production. We will buy imported Swords and Tunas from this point through the winter. We will occasionally see Gulf of Mexico USA production but the fish traditionally migrate well out to sea in Gulf waters as well. With less Sword and Tuna on the market and fish coming from farther off countries we will see higher prices on good quality Sword and Tuna. This usually continues until April.

Halibut
As we reported earlier in November the Pacific Halibut season is long past its end. The Atlantic fishery is nearing the same. With weather conditions becoming more difficult and quota becoming short we will see very few Fresh Halibut landings in the Canadian Atlantic. However we will see increased volume of Farmed Norwegian Halibut arriving fresh whole head on over the next couple of months. These Farmed Halibut are of the highest quality but run on the smaller side of wild caught Halibut. We will see some fish in the 20 pound range but most fall in the 10 to 20 pound whole head on size. We will have previously frozen Alaskan Pacific Halibut to offer as well. We start with a H/G frozen at sea 20 to 40 pound Halibut slow thaw in a cold environment and fillet to order. Both of these are great options for the months of December and January. We should see improved landings of 2016 Atlantic season Halibut starting slowly in February. We will report on the Pacific season kick off when the dates and quota limits are set. Expect that season to open by late March.