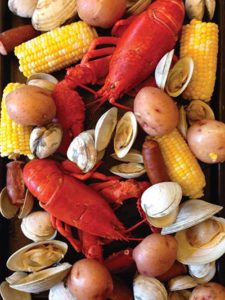 On a certain September day, you can stand on the grounds of St. Mary’s church in Olmsted Falls and smell the Atlantic Ocean.
It’s clambake day, and that briny whiff of the sea is coming from more than 100 dozen clams steaming in racks with sweet potatoes, corn and chicken.

Volunteers armed with tongs reach through the hot mist into a tub-sized stainless steel box and pluck out the bounty for each tray. A few folks carry jugs to the spigot to catch the mingled, ambrosial broth left behind.As patrons drop admission tickets into the basket in front of him, social chairman Bill Hoislbauer says clambakes are important.

“It means we’re sitting down to eat together and becoming more of a church family,” he says, “not just praying and going home.”Father Wally Hyclak agrees. After all, he’s the one who makes the sauce for the annual spaghetti dinner, St. Mary’s most productive fundraiser.

Clambakes, he says, don’t pay the bills, but as he dives into his own bowl of plump bivalves, he describes their special meaning: His own family staged one every year at his childhood home in Twinsburg.

“I still have my father’s copper kettle,” he said. “We don’t do clambakes anymore but once a year my sister uses the kettle to make my dad’s clam chowder for everyone.

Clams, along with other shellfish such as oysters and mussels, have a worldwide audience. But because of peak clam sales here in September and October, Northeast Ohio is considered the fall clambake capital of the country. Churches, restaurants, fire departments, neighborhoods, veterans groups, cheerleaders and ethnic groups all get into the act. One humane society calls theirs a Clambark. A gay group hosts an event where you can “Come Out of Your Shell.”

No spreadsheets document our prominence, since vendors consider sales proprietary information. But perceptions and experience among professionals who buy and sell clams runs strong. Sean Sullivan of Euro USA, who fills orders for top restaurants here, says it’s so. Ditto for John Catanese of Catanese Classic Seafood in the Flats, a retailer and the largest restaurant supplier in the area. And it’s true for John C. Young of Euclid Fish Co., a third generation fishmonger whose grandfather unloaded rail cars bearing iced-down barrels of clams from the shore.

Chesapeake Bay waterman Chad Ballard, now the largest clam producer on the East Coast, agrees with all of them. We’re the top market in the fall for his product – not Chicago, Boston or New York, which have their clambake peaks in late summer.

“From our perspective, the volume is incredible,” said Ballard. “The northeast part of the country buys all year round, going from 30 to 60 (miles per hour) during their season. Cleveland buys a few clams and then it goes 0 to 60 in the fall. You’re absolutely the fall capital.”

Some attribute it to our origins as a kind of second Connecticut, since the “Western Reserve” lands in the northeast corner of Ohio were given to those veterans of the Revolutionary War. Their seaside taste for clams just moved inland.

There’s our mighty pre-election clambake ritual, when politicians use clams to lure constituents. One of them, former Cuyahoga County Sheriff Gerald McFaul, admitted in court that he illegally forced his employees to buy tickets to his bakes.

While our love for the double-shelled food has held steady, clams themselves have changed. A growing number of them – 80 percent by some estimates – are now farm-raised. In a world where farm-raised seafood has a checkered reputation, clams stand out as not just a good thing, but also a necessary one. Things have changed that much.

What has also changed is our appetite for oysters,’ which once rivaled our love for clams.

In the early 1900s, tens of thousands of gallons of oysters were consumed annually in Cleveland alone, including by families who cooked them at home.

The food section of The Plain Dealer in 1914 was filled with reader suggestions on how to prepare them: In fritters, baked, sauced, wrapped in bacon, stuffed in a loaf, deviled, panned, scalloped, in soup and chowder, a pie, a hot cocktail. (“Hot” then meaning temperature, not spice.)

“Inexhaustible seem the disguises of the festive oyster, to judge by the great variety of modes in which Women’s Exchange contributors serve the bivalve up,” read a story about a recipe contest.

The city had restaurants devoted to exclusively to shellfish menus. At a Cleveland shop called “The Ocean,” one story said, “oysters may be purchased by the barrel or hundred; bucket and count oysters by the hundred, quart or gallon.”

In an 1899 shucking contest downtown, the winners opened more than 50 oysters in about five minutes.

In 1906, the golden-era mayor Tom Johnson showed up with 1,200 others to the Buckeye Club’s Clambake at “Giesen’s Gardens on Pearl Street,” which raised money for band uniforms for their Cedar Point appearances.

In 1900, the Fifth District Republican Club had its first clambake at its headquarters on Woodland Avenue.

Recounted The Plain Dealer: “The bake was very successful in every way and about 200, who evidently brought their appetites with them, sat down to devour the festive clam and all that is good that goes with it.”

Through the years, everyone seemed to have one, from carpenters to realtors to Kiwanis clubs.

In those days, most clams were harvested by hand rakes. Now, because of so many environmental changes, many of them are grown from egg. One-inch seedlings are sprinkled in the water and covered with netting to protect them from predators.

When full size, they are gathered by hydraulic rakes and sometimes stored to help clean out grit. Wet storage also keeps inventories high and prices regulated.

In the end, it makes clambakes seem a bit more like they always have been.

Which is fine by Father Wally.

“It’s a Cleveland thing,” he said, digging in. “They just don’t do this everywhere.”